Who are you and why should I care?

Hi! You probably shouldn’t care. But if you do (most likely because of something I wrote that made you livid), I’m Scott Jennings. I work in the computer gaming industry, and comment a lot here on my blog-type thing on whatever attracts my ever-shortening attention span.

I’ve been a game developer for 15 years, almost all of that on massively multiplayer games. My credits include:

I also have spent over 15 years writing snarky blog articles. I’m sure if you search the archives long enough you’ll find something that makes you livid.

I read a post you made that I disagreed with, so I’m going to make sure your boss knows I canceled all my subscriptions to everything you ever worked on.

I’m sorry? I really do try to keep this blog as separate from my day job as possible, which is admittedly difficult when I write about my vocation, which is also what I happen to work on since I’m a really lucky bastard. One of these days I really need to come up with a great disclaimer. Moorgard has a pretty good one. The problem is, no one ever reads them, and fewer believe them.

What have you learned from being on “the other side of the fence” after being one of those annoying ranters?

Making games is a political act. It’s the art of the possible. You do what you can do. You have limited resources, you have to herd cats to get things done, and you have to be a bastard to everyone you work with, but in a nice way so they don’t hate you. Oh, and you have to keep perspective so you don’t go insane, and as someone put it, little flecks of Lum-brain don’t explode all over the walls.

How do you get into the game industry?

I’m told writing for rant sites used to work, but now people actually expect you to have job skills and stuff. WTF, dude.

Make things. Produce. SHIP IT. “Ship it” is the slogan of anyone successful in the gaming industry, because something that kind of sucks that is in people’s hands is about 12 thousand times better than something perfect that no one ever sees.

If you want to be a designer and think deep thoughts, forget it and find something more useful to do. There can be only one Raph Koster and it’s really irking the rest of us since he got there first. Oh, all right. How to be an MMO designer? Play a LOT of games. Try to think on why they are the way they are. Think on their mistakes. Then think why someone made those mistakes. Try to avoid using the phrase “because they’re freakin idiots” even though that may in fact be the reason. Then, think of how you’d improve it. Then, think of how you’d fix it once the Internet stomped all over your first idea.

How do you get to DO all these? You get in the door, and you meet people, and you pay your dues. I was a programmer for five years before I got a shot at design. Others started as customer service reps, QA agents, artists, whatever. Some even didn’t get to work in design until they made their own company. But the important step is to get your foot in the door, and then make yourself known as someone who has thought these things through (a venue like a company mailing list works – if your company doesn’t have one, you can mark yourself as a smartie by pushing through setting one up!) so that when it comes time to give someone new a shot, your name is at the top of the list. And you probably still will have to kill several other people in a Klingon Rite of Ascension. I’m really not kidding. Design is probably the most competitive aspect of MMO production, because literally everyone thinks they can design and almost no one actually can.

If you think I’m full of it, hey, you’re in good company. Damion Schubert, Brian Green and the IGDA all have good thoughts on the topic of breaking in as well. Your best bet for finding actual job listings is Gamasutra.

You wrote a book? 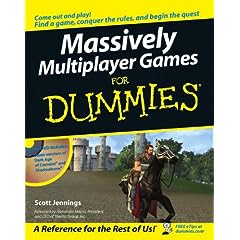 I sure did! It freaked me out seeing it on shelves, too. I don’t think it’s on many shelves any more and it didn’t sell that many copies, but you can probably still buy it, if you are so inclined. Should you buy it? While I would like to say “Yes! MORE ROYALTIES PLZ!”, honestly? If you’re an MMO veteran you already know everything in it. It’s written to introduce people completely unfamiliar with MMOs to the hobby. You may find it amusing (especially if you like my writing, for some unfathomable reason) or you may find it an ironic joke to send your guildmaster or something. But really, if anyone needs it it’s probably someone in your life who has no idea why you slay elves all day.

What do you do when not on the web being sarcastic?

I play a LOT of computer games. MMOs, strategy games, RPGs, the occasional shooter. I really like the whole computer games thing. I’m especially fond of ancient Final Fantasy games. I also read entirely too much about Russian history. I dunno, maybe it’s all the potatoes and vodka. At some point I will make a strategy MMORPG about the Russian Civil War. I will be the only person who plays it. But I’ll think it’s fun, and that’s what counts, really.

Not much else, really. I’m your typical no-life geek who spends more time on social networks then talking to people in real life. I live in the live music capital of the country and have not yet been to a single concert. I am a philistine.

sjennings (a) brokentoys.org. Many other email addresses also work, including scottj (a) brokentoys.org, lum (a) lumthemad.net, and other vestigal emails from the dawn of Internet time. I am pretty certain at this point I get more spam directed my way than Hormel quality checkers, and if not for Google Apps’ stellar anti-spam filtering I would be… well… Lum the Mad.

This Blog Is Very Old